We had a snow day Tuesday Jan 11th (without the snow it turned out) but I finally got to do a time consuming project on the layout, the back drop for Lynchburg over the Lower Basin Scene.

This is a panoramic view of the entire thing. You can click on it to enlarge it. The backdrop is from three different poster prints I took of the city last spring. A few modern buildings show, but they will be covered when I do the next phase. There will be an intermediate row of buildings behind the Jefferson Street buildings and in front of the city skyline. These, like the buildings will be made from Kingmills's Commerce Street "Radical Flats", which are slightly smaller than HO scale to add depth. Even without them, and taking pictures from strategic points the backdrop makes a big impact on the scene. 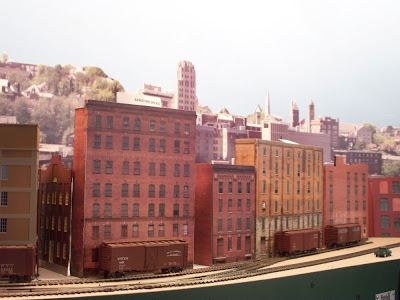 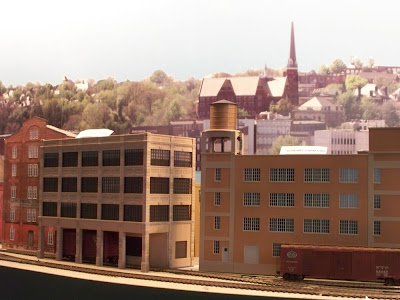 A lot of church steeples show on the Lynchburg skyline, and they are pretty tall themselves. Plus downtown Lynchburg is built up a steep hill. 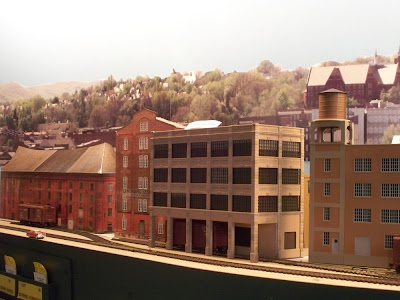 Looking a bit further east at Piedmont Mills. Those of you familiar with Lynchburg know that the Expressway Bridge (now Business 29)is just beyond here. It wasn't built until 1960 though so it will not show in the scene either. 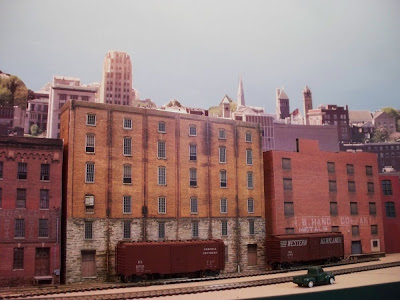 Another look at the west end of Jefferson Street. I'll have to build up the street just to the right of the N.B. Handy building and place a RR tunnel in the middle of it.