What all the fuss has been about.

Any of you who have seen me in the past two months have probably been subjected to a long dissertation on the somewhat involved installation of signals on the two ends of the visible layout. I finally finished it late last week. Oh there are still some labels to add to the dispatchers board, but it all works and the electronics is done. Here are some pictures and explanations. 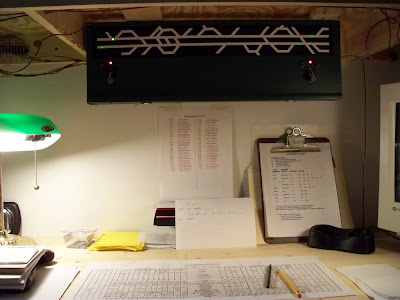 The Dispatcher's desk now has a small CTC type board to control the two ends of the layout, Montview and Rio. While the layout is double tracked completely (as was the prototype in 1956) the hidden reverse loops at either end are such that only one train may move into or out of them at a time...it's an electronics thing and it's not a problem, but every session someone forgets and it causes a short which shuts things down momentarily. Now the dispatcher can control a signal for every movement into and out of the reverse loops. There can be a green signal in only one direction. 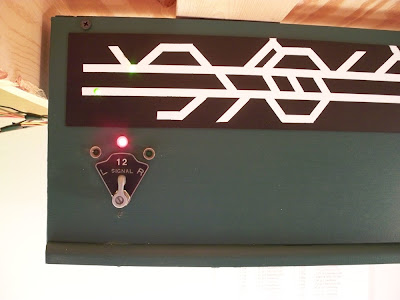 This is the Lynchburg end of the board (south end of the layout), and the signal is for Montview. In's it's middle position so there is a red signal for both northbound and southbound traffic . You might have to click on the picture to make it large enough to see the green detector lights in the schematic. These enable the dispatcher to "see" a train moving past the signal, so he can again make it red. These are strictly controlled by the dispatcher, and not any automation. 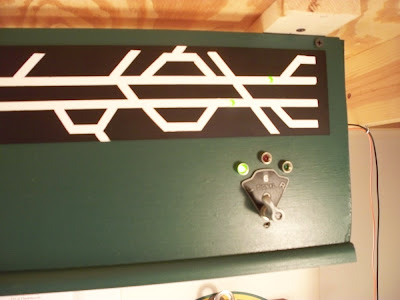 This is the Charlottesville (north end), the signal representing Rio, and it is flipped to allow southbound traffic to proceed, northbound will have a red signal. 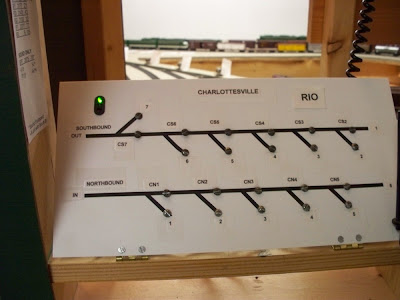 That means the southbound traffic can come out of hidden holding, and the signal for that is on the hidden loop routing board in the access door as you see here. 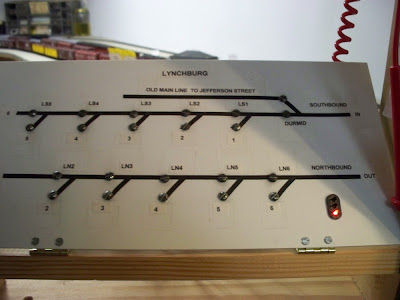 On the Montview board the northbound signal is red. 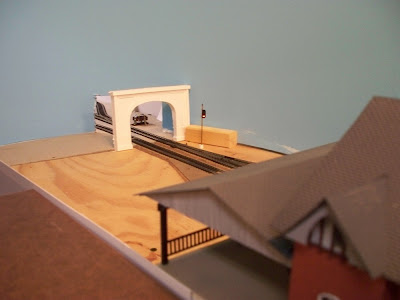 As is the southbound signal at Kemper Street Station for entering the Montview reverse loop. 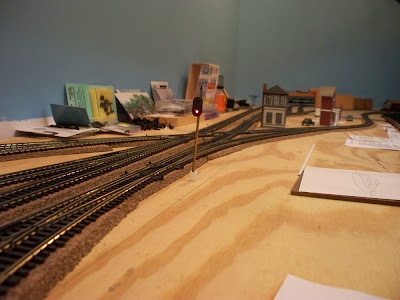 Looking northbound at Charlottesville is the red signal that not only protects the C&O crossing but also the entrance into the reverse loop beyond Main Street Overpass. Try to ignore the scenic model railroad parts that represent the city of Charlottesville at the moment.
Lets face it, adding signals is a lot of wiring and doing so after the fascia is in takes a lot of crawling around up under things. Getting the Montview signal and detector wiring over to the dispatcher's location on the Rio side meant crawling into the attic and pulling cables. Then it all had to be hooked up correctly..whew!