Charlottesville passengers now have a depot.

Over the past few weeks I've been "adding to" the flat from a previous layout that has served as Main Street Station in Charlottesville. 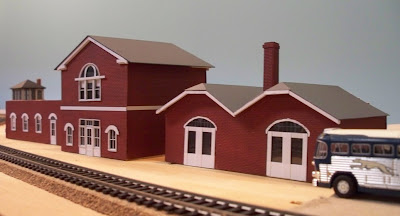 It's on the layout now, and I was pretty pleased with the results. I'll probably adjust it's actual location a bit more as the area between the Southern & C&O tracks on the layout isn't exactly like the real thing. I had to shorten the depth of the main building some because of space considerations, but all and all I think it looks good there. If I had been building it from scratch I probably wouldn't have detailed the Southern side since it's not really visible, but since I had already built that part, adding onto it means there's detail on that side too.